The Olympic Stadium saw more than a rugby match. The fans of USAP covered the seats of the Olympic Stadium with Catalan flags at a great Catalan identity party. Barša president Sandro Rosell was present at the event. 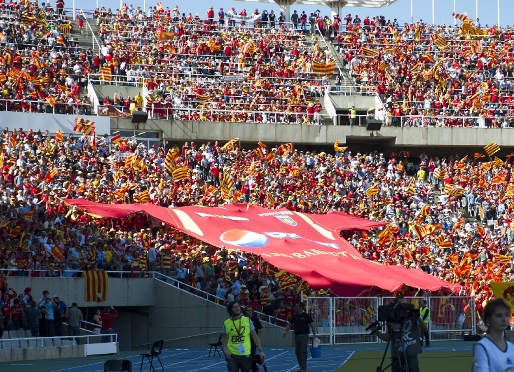 More info
Getting to the semifinals of the Champions League of rugby was not the only victory by USAP today in Montjuic. The two sets of fans, from Perpignan and Toulon, didn’t stop cheering throughout the 80 minutes of the game. In a historic day in which USAP played their first match in Barcelona, their fans stood out at an event where the Catalans from the North joined with the Catalans from the South, all this made possible due to the relationships between FC Barcelona and USAP.

Ramon Cierco, director of the non-professional sections said "Today has been a success of atmosphere, color and identity in Montjuic. These events explain why Barša and USAP are “More than a Club”. There were lots of activities before and after the game. I want to emphasise the value and richness that the Catalans from the North have brought to Barcelona on the occasion of this game”. Both sets of fans were able to enjoy the concert given by Els Pets, another symbol of Catalonia.

Everybody on their feet for the USAP anthem 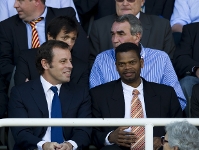 One of the most emotional moments in Montjuic was before the match between Toulon and USAP. The 55,000 fans stood up to sing, when the scoreboard showed Lluis Llach singing “l’Estaca”, the USAP anthem for the grand occasions, a song that reflects their Catalan identity .The singer-songwriter did the honorary k-off before the game.

The institutional representation of FC Barcelona was present during the whole event in the Directors Box at the Olympic Stadium. President Sandro Rosell enjoyed an historic match for both USAP and the city of Barcelona. At all times he was accompanied by most of the FC Barcelona directors. Before the game, the club directors Ramon Cierco and Didac Lee attended the lunch for directors of FC Barcelona and USAP