Application number greater than 29,904, on the road to Valencia

Members of FC Barcelona with an application number greater than 29,904 are the lucky winners of the draw for tickets to the Spanish Cup Final in Valencia. This Wednesday, the definitive seat allocation will be decided.

It’s important to remember that Barēa had 13,406 tickets for members and 3,351 tickets for supporters clubs. As the main novelty this season, the Club has provided members and supporters clubs with 85% of the tickets, an improvement over the 80% used in previous seasons. The remaining 15% (2,957 tickets) will be for Barēa’s sporting and institutional commitments, and for sponsors.

Of the Valencia ground capacity of 50,000 seats, each finalist has been allocated 19,714 tickets (40% of the capacity), with the remaining 20% going to the RFEF (Spanish Football Federation).

This Wednesday at 10a.m. in the Richard Maxenchs press room, the draw was made, before a notary, for tickets to the Spanish Cup Final, against Real Madrid. The application, from which the ticket allocation has begun, is number 29,904.

Each member could only make a single application in their own name, but on the same form they had the opportunity to register up to four member applications, if they wanted to travel together.

For the game in Valencia, on April 20, 72,767 tickets were applied for, via 32,514 application forms. The Club has 13,406 tickets available to members for the match. The great expectation generated meant that, in the end, a draw was necessary, carried out by computer program in this case, and validated by the Notary, Gerard Conesa.

This Wednesday afternoon the final application number for the trip to Valencia will be decided. 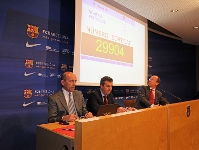 From the 16th to the 18th of March, the Club will contact the winners via the email that members gave at the time of application for tickets.

The first step in ticket allocation, after finding out the first application number, will be to ensure that members are up to date with their payments and are not open to any disciplinary proceedings by the Club.

For the members who meet these requirements the process will begin to assign seat numbers to the lucky applicants. The Club will communicate, to the lucky members, the process to be followed for ticket collection.

At the time of application, members had to register bank card details. In the case of being successful in the draw, the card will be debited, automatically and immediately, with the amount of the ticket reservation and the purchase will be made formal. In the case that one cannot make the payment, the right of purchase will be lost.

Remember that the price of tickets for the final of the Spanish Cup in Valencia, against Real Madrid, is between 60 and 250 euros.