The USA Perpignan team exchanged photos, good wishes and shirts with the Barša players this morning and they were all clearly impressed later on in the morning when they visited the Nou Camp installations.

There’s a great mix of nationalities in the Perpignan team and the expressions of admiration for the Club and the team came in a variety of languages, but all the players were well impressed with the facilities and the stadium. 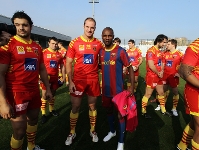 "We’re very happy to be in Barcelona, it’s very important for our club”, according to Perpignan captain Nicolas Mas, on his arrival at the Stadium, where the players mingled with visitors for the Tour del Camp Nou Experience, who were themselves surprised at the size of the players in their midst.

Fans of the team 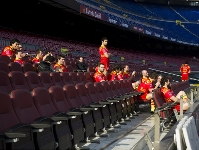 Lock Olivier Olibeau follows Barša closely and reckons it’s “fantastic” to watch the team at the Nou Camp “they make it look so easy”, something his Argentinean front row colleague Rimas ┴lvarez-Kairelis agreed with, though he naturally enough had words of praise for his compatriot Leo Messi: “I love everything he does with Xavi and Iniesta . At Perpignan, like at Barša, we are all equal and the most important thing is not the individual, but rather the team as a whole”.

USAP and Barcelona made history with their twinning agreement and the best way to celebrate was to bring the two squads together. This morning at the Ciutat Esportiva Joan Gamper the players posed together for photos, whilst ╔ric Abidal broke the ice with his countrymen and Carles Puyol, Xavi and ValdÚs posed with Perry Freshwater and Henry Tuilagi, as Michel Joffrey and JÚrome Porical clicked away with their mobiles. 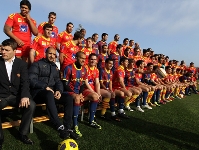 USAP are due to play a game in Barcelona on April 2nd and ┴lvarez-Kairelis commented: “there are a lot of fans who want to see us play here and we are happy that we will be able to”. Many of the players were happy enough today after meeting some of the world’s best footballers.