The visit to the Ciutat Esportiva, a photo shoot with the first team squad, a tour round the Nou Camp and a meeting with Club President Sandro Rosell were the highlights of USA Perpignan’s day in Barcelona on Monday. 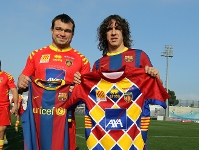 The French Rugby team arrived at the Ciutat Esportiva Joan Gamper at 10.00 on Monday morning and joined the first team squad on pitch number 1 for a group photo. The two groups of players chatted together until Guardiola began the training session, which the French team watched. 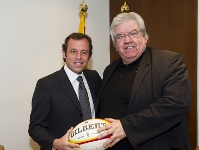 Next it was off to the Nou Camp, where both Presidents signed the twinning agreement between the clubs. Board members Ramon Cierco and Dídac Lee accompanied Sandro Rosell and Paul Gozé for the official signing.

Meanwhile, the players were enjoying the Nou Camp facilities as they took a special tour of the Stadium, finishing off with a group photo on the pitch. 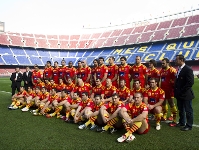 The twinning agreement is one of the main points in the collaboration agreement between the two clubs, which also proposes that the sport of rugby and USAP in particular be promoted through FC Barcelona, as well as looking into the possibility of a match at the Nou Camp involving USAP in 2011. The French League game between USAP and Stade Toulouse will finally be held on April 2nd at the Luis Companys Olympic Stadium with the full support of FC Barcelona.