Laporta to continue as president

Laporta to continue as president

The Assembly of delegates of FC Barcelona have given their support to Joan Laporta and so he will continue his presidency until 2010.

With 55.83% of votes in favour, those members present showed their support for Joan Laporta and so he can now continue leading the club for the next two years, when his term of office finishes. Remember that Laporta voluntarily put himself forward for this confidence vote in an unprecedented move following the results of the vote back on 4 July.

Before learning the result of the vote by the delegates, Joan Laporta asked for a positive vote from the assembly, based on the need for the club to have “stable governability”.

The president said the results of the vote on 4 July were a “punishment vote” but said he wouldn’t resign because he saw an immediate need to continue leading the club. He said the club couldn’t enter into a spiralling process of elections. “We had to make decisions to restructure. We were aware of our responsibilities. That is key. Our conscience is clear.”

The same dream with more experience

Joan Laporta also briefly reminded everyone of the financial situation over the last five years. The successes of the club economically and socially have allowed the club to continue with its project as outlined in 2003 “with the same dream but with much more experience”.

To face these challenges he asked “to go forward together” by not “belittling our success”. He finished by saying that the best was still to come. 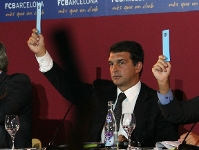 The vote on Laporta continuing as president or not was originally tabled as point number seven but was moved to number four in order to make the most of the maximum attendance possible. This was achieved with 942 members voting, the highest number of votes cast during the day’s proceedings. The results of the vote were: 526 votes in favour (55.83%), 376 votes against (39.9) and 40 blank votes (4.24%).