The budget for the 2008/09 season, the highest in the club’s history at 380 million euros, has been approved by the Ordinary General Assembly this Sunday with 736 votes in favour, 79 against and 89 blank votes.

A record budget. This is what the Mediators Assembly has approved this Sunday afternoon in the third point of the day. Joan Boix, treasurer and economic vice-president explained that F.C. Barcelona hopes to earn 380 million euros in the 2008/09 season and he branded this budget as “ambitious and exciting, but above all affordable, thorough and realistic”.

In this sense, Joan Boix highlighted how the board congratulated itself on “being able to confirm that these figures exceed our greatest expectations”. “The business plan presented by the Board in 2003 predicted earnings of 245 million euros this season and we’ve made it to 380”, he added.

Reasons for the growth

This growth, some 18.7% on the last tax year, is due to several factors. The first reason is through media income thanks to the new television contract with Mediapro, a contract that guarantees a yearly income of 120 million. Boix describes the deal with Mediapro as “one of the best audiovisual contracts in the football industry”.

The second largest area of growth is in marketing, which has grown by 46.1 million euros. Included in this block are three main principles according to Joan Boix. One of them is the recovery of the running of the shops and licences from Nike. “It’s all about a line of business which will allow us to increase earnings by 32 million euros, compared with 7 last season”, pointed out the Barcelona vice-president. “We should bear in mind, however the new sponsorship agreement for the kit with Nike, which will allow us to go from 23 to 37 million in earnings. The third and final aspect is the marked rise in the concept of club sponsors.

As for expenses, Joan Boix commented that the club “will go back to moving within normal parameters this growth signifies”. That way it is expected that this 2008/09 season spending 355 million euros will generate a benefit of 25 million euros with a pre-tax profit of 15. The tendency to obtain regular profits started in the 2003/04 season is maintained.

The loan will be paid off

If the club paid off 13 of the 26 million bank debt last season, it is expected that in 2008/09 the club will return the outstanding 13 million. This would mean the paying off of all loans.

What’s more is that they will continue to invest in other activities, such as the 12 million euros planned for improvements and maintenance work on the Camp Nou and the other sports installations and the investment of 8 million in the new young footballers home in Sant Joan Despí.

In short, Joan Boix has set out some figures that he has described as “exceptional”. “The club is consolidating a business model which is self-financing and sustainable after 5 years of profits. At the end of this season the accumulated working profit for the last 5 years will 102 million euros”, he concluded. 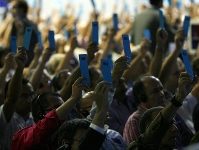 Sala i Martín: “the economic dynamics are positive”

Once Joan Boix finished his speech, the president of FC Barcelona’s statutory commission, Xavier Sala I Martín, expounded his bodies report on the 2008/09 seasons budget. After discussing some of the points set out by Joan Boix, especially that of the budget’s growth, Sala I Martín concluded: “The budget for the 2008/09 campaign is similar to the last five seasons. The economic and financial dynamics of the club is positive”.