The General Assembly had 1,000 accredited delegates in attendance today. You have to go back to 2001 to find a better turn out with 1,058.

Despite being held on a day when there was no football match (it’s worth remembering that Wisla wouldn’t agree to change the order of games for the Champions League qualifier), the attendance was quite high, with a total of 1,000 accredited members. This was the highest attendance since 2001.

One of the highest figures

That season, seven years ago, the board of directors organized a trip to the works on the Ciudad Deportiva Joan Gamper on the same morning as the General Assembly. There was also a brunch with all the delegates. We need to look further back, to 1996, to find an attendance similar to that of this year – 982.

Since Joan Laporta became president in the summer of 2003 this is the first time that the General Assembly has met on a day when there was no match. 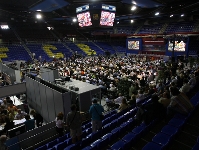