Barça Regal played a great all-round game against a Prokom side that made things difficult in the first half. It was a winning start to the Euroleague campaign at the Palau with Perovic, Lorbek and Navarro especially outstanding.

Referees: Radovic (CRO), Chiari (ITA), Reiter (GER)
Xavi Pascual’s side is still having a wonderful season in which the only negative vibe so far has been the defeat to a very strong Cajasol Sevilla.

Lorbek and Perovic got Barça off to a flying start against their Polish visitors, who missed Gee for some time though injury. But after it got to 20-9, Prokom bounced back with a 3-9 streak that meant the first period ended 23-18, although some of the refereeing had been bit a little harsh, especially the two consecutive fouls called against Boniface Ndong.

Prokom are a physical side, and that became evident in the second period and a Gee slam tied things on 25, after which Pascual called a timeout and sent Juan Carlos Navarro back out, while Pacesas also started rotating his bench.

Barça were struggling against the zone defence and a 6-15 streak, including two more or less consecutive threes from the Poles to make it 30-33. But some good defending by Perovic and the returns to court of Eidson and Navarro, with Huertas directing the play soon got it back to 35-33 before 'la Bomba' scored 9 points in 4 minutes to help make it 47-36 at the break. 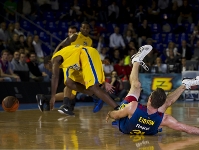 Barça Regal came out just as strong in the second half, and soon stretched their lead to fifteen at 51-36. In the short time Blassingame was on court he was able to show his qualities but a triple from Lorbek, the fifth in 12 attempts soon extended the lead to 56-40 with five minutes of the third period still to play.

Mickeal and Rabaseda were also given run-outs in a period that also revealed some of Chuck Eidson class as he directed, assisted, scored and rebounded, while Lorbek got Barça Regal up to 64 points.

The Poles kept battling away in the final period, but both Ndong and Marcelinho Huertas were in no mood to be surprised, and Barça refused to let down their guard. Lorbek topped off an amazing performance with a series of excellent plays to ensure Barcelona go 2-0 in their Euroleague group with an 88-61 win, with Pascual even giving young Josep Pérez some minutes towards the end.