Two-time NBA champion Pau Gasol joined Barça Regal for training this Thursday, alongside his brother Marc. The two will train under Xavi Pascual whilst the NBA lockout continues.

More info
Pau Gasol was back wearing Barça colours on Thursday –though it was only the training kit the team use- amid considerable media attention. He joined brother Marc, who started training with the team on Tuesday, whilst they await the outcome of the negotiations to resolve the NBA lockout. Pau has started training later than his brother due to the problems he still had following the ankle injury he picked up in the European championships in Lithuania. 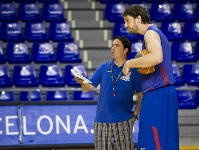 After giving a packed press conference, Pau was the last player out on the court he left 10 years ago. The first thing he did was to greet coach Xavi Pascual, before joining the rest of the players as they prepared for Sunday’s league opener in Murcia (12.30 ). Pau is certainly a luxury reinforcement for the team’s training sessions.

Pascual was able to call on a full squad for the session and as well as the Gasol brothers, reserve team players Josep Pérez and Ivan García, who have been with the first team squad for the pre-season, also joined in. Technical secretary Joan Creus followed the session from the Palau stands.