A few minutes after 5pm, Pau Gasol appeared in the club offices. The L.A. Lakers star will be joining training with Barša Regal along with his brother Marc.

The press conference at the Palau Blaugrana was attended by more than 80 media professionals in representation of more than 50 different media companies.
But first he gave a well attended news conference in the Palau Blaugrana, where he explained that he was happy to be home and “grateful for the opportunity given to me by Barša … I’m very happy. It is different and special to be in these circumstances. It is very unexpected, but now I’m happy to work hard to help Barša Regal with everything I can."

"This is the club where we learned the game", said Gasol. He explained that given the lockout "it makes sense for us to come here. The option came up and Barša agreed and we are very grateful to be able to train with one of, if not the best squads in Europe."

The older Gasol added that “we can offer quality to the training sessions. We will work hard, as if we formed part of the team, to add competitiveness and we hope that this will be a positive thing.” 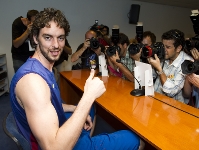 Pau Gasol also spoke about how they had come to this arrangement with Pascual: "My idea is to join as many training sessions as possible in the afternoon and morning, we’ll see. If I have commitments outside of basketball I’ll always tell the coach. Our idea is to join the team dynamic. It is a situation that both Marc and I see as an opportunity. We are very grateful to Barša and we’ll do this naturally and professionally.”

If he eventually cannot play in Los Angeles, Pau says that “the Endesa League is the best in Europe, and if there is no NBA, then this would be the best option. I respect all the NBA players that have decided to play in Europe or China, but we have decided to train and we’ll see what happens later."

Pau Gasol never won the Euroleague in his time at Barcelona. "I’d love to win it one day” he said. “It is not something I can aspire to at the moment because I don’t play for a Euroleague team. Maybe in the future.
I’m not losing sleep over it, but if I do ever win it, I’d like that to be for Barša." 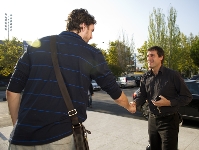 He also spoke about the lockout in the USA, saying "I don’t know what’ll happen. We are proud and happy that the players aren’t letting their arms get twisted regarding the teams’ demands and when the owners are ready to present an agreement that is fair for everybody then we’re ready to start competing again."

Gasol also said that the players are ready to play a shortened season, as has happened before. “It would be a catastrophe for the whole NBA season to be cancelled. Nobody wants it to stop for a year. I’d understand it if some players choose to join top level teams. It would certainly be dramatic for the image of the league, the fans and the NBA players. It would have a negative effect on us, also financially, even if that were a necessary sacrifice for present and future players."

"Both Marc and me have insurance policies to cover accidents or injuries. They are covered by my contract and his potential contract."