Marc Gasol, the first to return to Palau

Marc Gasol, the first to return to Palau

The Gasol family return to breathe Barcelona air. First one to do it was Marc, who on Tuesday, just after 18.00, stepped on to his former court. On Thursday, Pau will be doing the same thing 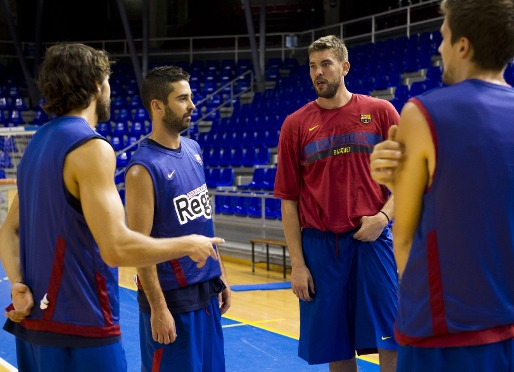 More info
Just over 15 days ago he shared a dressing room with Juan Carlos Navarro and Victor Sada. That, however, was in Lithuania and the European Championships that they ended up winning. Now the NBA player has come back to the Palau Blaugrana, the pavilion which was his home a few seasons ago, to partake in the Regal FC Barcelona training sessions, and so as not to lose his form for the duration of the lockout. 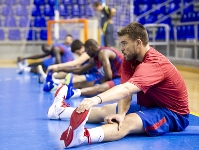 Marc Gasol, who had to take a physical test on arrival at the Palau, recognised, a few minutes before going on to the court, that it was a very special moment: "I’m pleased to see some familiar faces, and others who I haven’t seen for a long time, and I’m keen to start training".

About the fact that he was coming back to what was his home some time ago, Marc said "it's always special to return to the Palau because I grew up here. And I’ll be training with one of the best squads in Europe, who compete at such a high level".

The Technical Secretary of Regal FC Barcelona wished to emphasise the great satisfaction derived from having two "world class players" back at training "Having the Gasol brothers back is great. Firstly, because they are two world class players, and also because they were brought up here. So the link carries on. We’re also happy because they’ll help improve the quality of the training. Having the two brothers will up the intensity, due to their quality. We also have the chance to see the battles amongst themselves. We’ll all benefit, because they’ll have some very good opposition, and they’ll help the team to improve their performances later on".