Barça Regal have won their Spanish Supercup semi final after a tough encounter with Real Madrid. They had to come back from seven behind to win their place in the final against Baskonia. 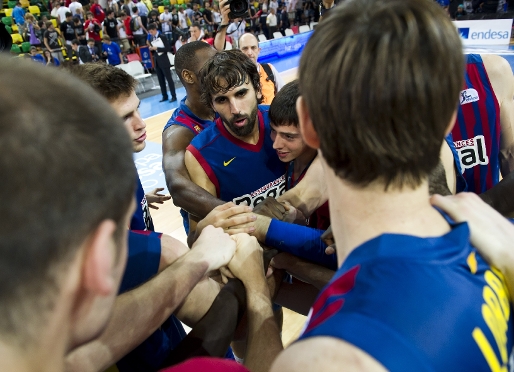 Referees: Hierrezuelo, García and Bultó
Barça Regal started their semi final with Real Madrid in fine form, but fell behind in the third before bouncing back in the fourth to make the final (Sunday, 18.00, Teledeporte) and face Caja Laboral in their bid to win the Supercup for the third year in a row against the only other side to have ever won this title.

There was a fairly mute atmosphere in the pavilion after Bizkaia Bilbao Basket had lost the first semi final, with more polite applause than genuine passion as Barça Regal looked in command as they went into an early 6-0 lead. Madrid responded through Martynas Pocius, whose 6 points in the first period helped keep his team in the fight.

But by the second period, Barça Regal were twelve up, playing good, flowing basketball, and although Navarro missed two 3-point attempts Barça were dominating the rebounds, although perhaps not getting as much reward as they deserved.

Barça continued eating away at Madrid’s morale, but more in terms of play than points, and a series of sloppy errors allowed the all-whites a 5-0 streak to get back in touch. At the break it was just 35-33, and Llull could even have put Madrid into a somewhat undeserved lead had he converted a late 3-point attempt.

A Carlos Suárez three soon after the restart did put Madrid ahead for the first time (37-38), and although Wallace responded likewise, Martynas Pocius then got another three to make it 42-42, with 17 minutes still to play.

The game suddenly got much more physical, and five fouls in a row gave Madrid further opportunities to cause damage. Navarro just wasn’t having his day and Madrid were soon in firm command at 46-53 following a Jaycee Carroll three.

The final period started with Barça in trouble at 52-58, but Juan Carlos Navarro finally grabbed some essential points to narrow the gap, even though there was clearly something missing in the way his team was playing. But Madrid failed to capitalise on their lead and ultimately paid for it.

Barça patiently collected points as they could to bring things back level with two and a half minutes to go, and then a trademark Navarro score plus two frees from Lorbek and a couple of points from Marcelinho finally put Barcelona back in control.

Now they had got their lead back, Barça Regal were able to use that to their advantage just as Madrid had failed. Chuck Eidson looked to have settled things with two free throws to make it 70-65 and although Pablo Laso called a timeout to attempt the impossible, there was no way his side was coming back, and Barcelona, without playing their best basketball, are into the final.