Any team can slip up, as Regal Barça showed against CAI, but the European Champions don’t do it twice and against Menorca at the Palau on Sunday they ran up a massive win to put things back in their place.

Xavi Pascual’s team were superior in all aspects of the game, especially with their three pointers – five players reached the 10 point mark –but this was a team effort, and what a team! Regal were 15 points up at half time and they extended that to a stunning 40 points by the end of the game.

Ndong and Lorbek lead the onslaught 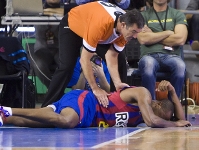 Regal made it clear there was no risk of a surprise this week, as they powered to an early 14-5 lead with Ndong, Lorbek and Morris setting the pace. The American was one of the stars of the show and one of the players to reach double figures.

There were quite a few away fans at the Palau, but they could only look on as Barça brushed aside their team, who managed to rally a little in the second quarter, finishing with a Servera three pointer on the hooter from the half way mark to leave the scores at 42.27 at the break.. 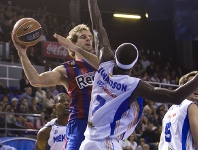 Only four Mallorca players managed to score in the first quarter and although that improved in the second, the ever-willing Donaldson with 9 points seemed their only argument and that was never going to be enough to stop Barça in this mood.

No change in the second half 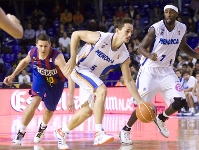 The team came out with the same mentality for the third quarter and Mickeal and Navarro upped the pace as the Mallorca team failed to stop the three pointers from flying in. The splendid Jaka Lakovic made it 61-33 with one such score and Mikeal and Lorbeck hit two more immediately after that as the distance between the two teams continued to grow. Mallorca were unable to make any head way in attack as a plethoric Sada made a total of 10 blocks and scored just 9 points in the final quarter, 17 in all the second half, to record the fourth worst points score in ACB history. 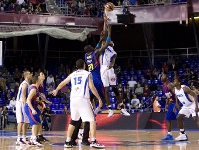