Regal Barça suffered for their win at Cholet, as the French team closed in to narrow Barça’s lead to a single point in the final minutes, before Lorbek steadied the ship to ensure the victory.

Two three-pointers from Lorbek and another from Víctor Sada put some space between Barça and Cholet as the hosts pushed to within a point with just a minute and a half to go after Mejia had bagged his own late three pointer to bring the French minnows to 73-74 and send the home crowd wild. 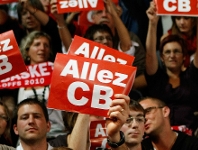 The European Champions were applauded onto the court by the French fans – but that was before the game and once it started they were vociferous in their support for their team. Not all the crowd were against Barça though, with ex-coach Valero Rivera’s son, who now plays in Nantes, in the stands.

After the weekend’s shock defeat to CAI, the team were determined to bounce back and impose a fast, direct and effective game on the tie and with Boniface Ndong controlling things under the basket, Víctor Sada marking the pace and Juan Carlos Navarro clocking up the points, Cholet coach Erman Kunter was forced to call a time out after just five minutes as his team slipped to 6-15 on the scoreboard.

It didn’t do much good though, as Barça’s fast movements and passing gave them a 10 point lead at the end of the first quarter, which they soon stretched to 15 in the second (14-29). 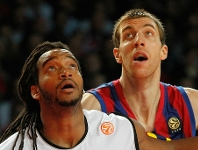 Just as it looked as if Barça might stretch away though, Cholet’s zonal defending began to be more effective and the points dried up allowing the French team to claw their way back into the match at 29-33, before Navarro led a fight back just before the break to send the teams in 29-38 at half time.

Glimmer of hope for home fans

Barça’s good start gradually slipped away though. Even though they were always in front, Cholet began to look ever more threatening. Ndong and Lorbek held the team together with their interior play, but Sammy Mejía and Antywane Robinson, with 17 and 16 points respectively, gave a glimmer of hope to the home fans who sensed there could be an upset on the cards.

Lorbek and Sada steady the ship 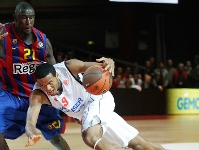 In the final quarter, Mejia drew Cholet to 68-70 with three minutes eleven seconds left on the clock, only for Lorbek to hit back with a three pointer. Mejia wasn’t giving up though and with a minute and a half to play, he bagged another three pointer to bring the hosts to 73-74.

Barça hit back though, as first the cool headed Víctor Sada made it 73-74 and then Lorbeck’s six points put the game to bed as the hosts proved unable to reply to the reigning champions in the final seconds. 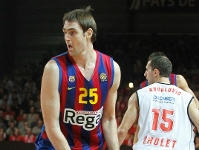