“We showed we can suffer and win”

Pascual: “we showed we can suffer and win”

Regal Barça’s second ACB win was no pushover, but despite the weaknesses shown at time during the game, Xavi Pascual was full of praise for the team’s commitment.

The defence found it hard going at times, but the coach valued the points and reckoned: “we showed we can suffer and win. Winning is always the most important thing and you have to be positive about that.

Below are more of the coach’s post match declarations: 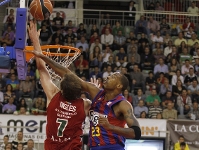 “We are happy with the win against Granada who are always a team who score high. We weren’t solid in defence and sometimes that was down to us and sometimes down to them - Ingles and Korolev put in a very good game”.

“Having players who are not fit always affects you, but that can’t be an excuse. We’ve got one game next week, but after that we’ve got two in a week. Whether we are tired or not, we have to go out and win and play well”.

“We faced a team who played really well. With Gianella and Fernández out, we knew they’d be a threat with the three pointers, We were never really comfortable in the game, particularly in defence. We were superior in attack though.

“I don’t know if we are the best in Europe –that’s something we’ll have to show every day. We weren’t at the level we need to be today”. 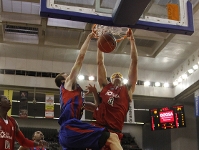