Victory echoes around the world

Victory echoes around the world

Regal FC Barcelona's historic victory against the Los Angeles Lakers has made news headlines all around the world.

In the United States the media emphasised how well the Blaugrana played and praised star players Pete Mickael and Juan Carlos Navarro. Excuses were made for the stage in pre-season that the Lakers are in and it was acknowledged that they will improve in the three weeks before the start of the NBA season. 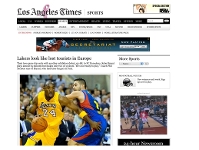 Especially critical of the visitors' performance was the Los Angeles Times who stated: "The Lakers appeared to be tourists who were lost in Europe." They also highlighted the "miserable" percentage of shots converted by Kobe Bryant as managed just two from 15.

New York Times and USA Today took similar lines as they used the Associated Press coverage to show that the Lakers did not score one of 14 triple attempts and showed little consistency in this high-profile friendly. "Neither team played like it was merely an exhibition. Three technical fouls were called," they wrote. 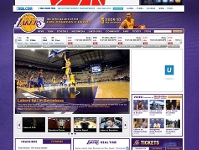 On the LA Lakers official website the report stated that "although the Lakers did everything they could to win they are still in pre-season". Along with the game the story focussed on the packed house and vociferous crowd who welcomed Pau Gasol and Kobe Bryant. "Gasol wasn’t the only Laker that got plenty of love from the fans, as Kobe Bryant spent nearly 25 minutes on the floor. Still recovering from offseason knee surgery, Bryant had played only six minutes in L.A.’s Monday loss in London, but clearly felt better on Thursday," they wrote. 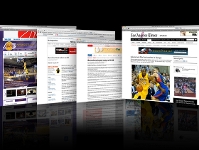 In the European media the Blaugrana win against the Lakers was covered in detail and La Gazzetta dello Sport proclaimed "hero Pete Mickael" as the difference between the two teams. L'Equipe also highlighted to the American and stated: "He had a great game with 26 points, 13 rebounds and six assists."