Phil Jackson: “Barēa could not compete in the NBA”

Phil Jackson: “Barēa could not compete in the NBA”

Phil Jackson was less than complimentary about Regal FC Barcelona after they beat his Los Angeles Lakers team as he stated that the Catalan outfit do not have what it takes to play in the NBA.

The coach felt that the Blaugrana had played well in the pre-season friendly on Thursday night in the 92-88 triumph, but that they would not be able to hold their own in the American basketball league. "They played well in this game, but they would not be competitive in the NBA," he stated. "They do not have the physical capability or the height to do it, but that should not detract from their deserving win here."

Praise did come for the performance on the night though. "We knew that Regal Barēa were a physical team," Jackson continued. "They play with desire and endeavour. I think that Pau (Gasol) did not score a basket in the second half and that was thanks to the defensive work of Barēa's guards. They played well and scored a basket more and nine assists more. That showed that they deserved to win."

Below are what some of the Lakers had to say

"Barēa played much better than us in the last quarter. We missed a lot of shots, we lost many balls and we were unable to avoid defeat."

"Kobe was not really ready to play. He did it for the fans and his team-mates. He asked if he could play in this one and we let him."

"The starting team did well in the third quarter, but we committed some mistakes that have not allowed us to move ahead in the scoring." 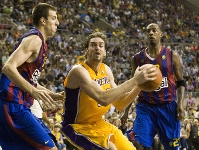 "I am pleased to have enjoyed this experience and, although they have been an exhausting few days, the atmosphere was incredible."

"Barēa are a great team, the best in Europe, and they showed that. They are the favourites to win many trophies and I hope they can win the lot."

"I would have preferred to win, but we know that we are still early in pre-season still. Anyway, it is not hard to take because my friends won and a lot of people were so happy."

"Now we want to go back to Los Angeles and continue working. It has been exciting, obviously, but these trips are not the best way for us to prepare for the season. There is still a long way to go."

"It was a fun game in front of a full house." 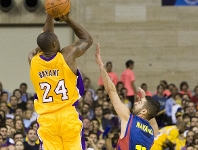 "I like to play in competitive games and this was one and I do not mind that it was hard. We expected that beforehand as we are both champions and it was a good practice game. It does us good to train and that helped us."

"To lose against Barēa is not a bad point in Lakers history. It is pre-season. It would be great to see what would happen if we played them under normal conditions."

"I think that Ricky (Rubio) is ready to play in the NBA. I have played three times against him and know what he can do. I am not saying he should go though."

"If I could one day play for Barēa? I would think about. I would like to play in Europe, I am comfortable here. If one day I leave the NBA I would consider playing here. The organisation is great and the people are professional. I would be daft not to think about Barēa." 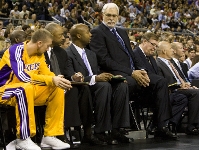