Los Angeles Lakers star Kobe Bryant has revealed that he enjoys following the fortunes of FC Barcelona's football team as he arrived in the Ciutat Contal ahead of the basketball game against the Catalan club.

"They have a great side and I follow what they do," he said of Pep Guardiola's outfit. On Thursday the Lakers take on Regal Barēa and Bryant believes that the game will be an enjoyable one as his team continue their pre-season preparations with a tour of Europe. "I will definitely play," he explained. "I think it will be a fun game between two teams that will play hard." 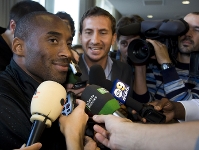 After only playing six minutes in the Lakers game against the Minnesota Timberwolves on Monday in London Bryant was keen to ease fears that he may not be available this week. "I am very well," he continued. "I will try to play for longer than I did on Monday. I do not know how long that will be, but it will be more." The American is no stranger to Barcelona as he added: "It is the second time I have been there and I want to enjoy it."

Pau Gasol will be one of the stars of the show when the Lakers meet Barēa and Bryant knows how popular the Catalan is. "I am pleased for him," he stated. "It is exciting for him to return home. I know that he is seen as a hero here. When we talk it is more often about soccer than it is about basketball though." 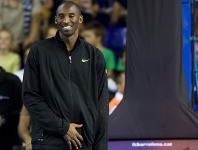 Bryant was then asked if he could see many similarities between football and basketball. "Whatever sport you are in it is important to fight every time you have the ball," he said. "You have to keep going the whole time." The Lakers are on currently on tour and he is enjoying himself. "It is very important for us, but I cannot see any favourite for the game on Thursday."

On whether he would ever be tempted to play in Europe Bryant added: "I would love to one day, maybe in Italy," he said. 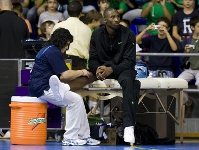 Kobe Bryant fielded questions from the media on Tuesday and was asked what he thought about Barēa star Juan Carlos Navarro. "I do not know if he is the best in Europe, but he is one of the best," he explained.

On Lionel Messi the basketball star added: "He is the best in the world." Asked about Xavi and Andrés Iniesta he explained: "They are also very good, but I think Messi is the best."