“It would be extraordinary to have Rudy”

Navarro: “It would be extraordinary to have Rudy”

Juan Carlos Navarro is enjoying a couple of days rest in Barcelona. In this interview he explains how things are going in the Spain camp and gives his thoughts on the possibility of signing Rudy Fernandez.

Last year he was asked pretty much the same question about Ricky Rubio – would he be a good recruit for Regal FC Barcelona? Now the focus has moved on to Rudy Fernandez but Navarro believes that the situation of the Portland guard is different though he hopes the end result will be the same.

How are preparations for the World Championship going?

"Very well. We all know each other and the new men have fitted in well to the team. We’ve got two days off now, which will be great to recharge the batteries”.

Did you find it hard to get back to work after the holidays?

"Very much so, because you have to leave behind your family to join the training camp again. Fortunately, it’s such a good group that it doesn’t seem so bad, but it’s always hard to get back to work”.

How are the preparation games going? Can we draw any conclusions?

"We’re still at the preparation stage. Right now we’re not too concerned with the results. It’s more about getting fit, understanding the coach’s systems and getting more and more coordinated”.

The fact that there are so many players missing from the other squads makes you the favourites or is that a double-edged sword?

“Given the excellent results of the past few years we’re favourites just the same. Or at least one of the favourites. But we mustn’t take our eye off the ball because there are some incredibly strong teams who want the same thing as we do”.

Let’s talk about Barça 2010/11. Do you know Perovic? What do you think he can contribute?

“I’ve played a few times against him in the ACB league and with Spain. I’m sure he’ll bring a lot to the team and he’ll help us a lot with the rebound and his physical presence. He’s a young and very tall player. I’m sure he’ll be a big help”.

What do you think about the recruits in the other teams, especially the title contenders? 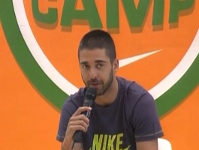 “Everyone’s recruiting a lot and there are some really interesting players joining the ACB. But it’s still too soon to say who will be the main candidates for the title. When all the squads are closed we’ll be able to assess things much better. However, I’ve no doubt that Caja Laboral, Real Madrid and Valencia –who have also put together a good group–, will be tough competitors.

“It’s a bit different. Ricky hadn’t signed anything with any team in the NBA. He’d only been drafted. Rudy’s case is different because he has a contract with Portland and is pretty well tied up. Obviously, Rudy is an extraordinary player on every level. He’s my team-mate in the Spain squad and if he could join Barça he would be very important for us. But for that to happen a lot of things have to fall into place and it’s not down to me to comment. If, in the end, he signs for Barça, it would be perfect. If not, it doesn’t matter because we’ll still have a great team”. 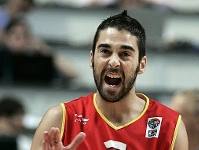 Juan Carlos Navarro became the captain of the Spain squad after Carlos Jimenez retired from the international game. In Poland last season he won his first trophy as captain – the European championship. A year later he’s hoping to repeat that success in the World championship: “I had the chance to win it in Japan when we beat Greece but I wasn’t the captain. That was our first great victory and I’ll never forget it. But I can’t deny that I’m really excited about this tournament. Lifting the trophy would be fantastic”.