Regal Barńa have won at the OlĒmpic de Badalona and stay top of the ACB for another week. PascualÆs side are closer than ever to the top spot in the regular season, but this game was an extremely tough test. 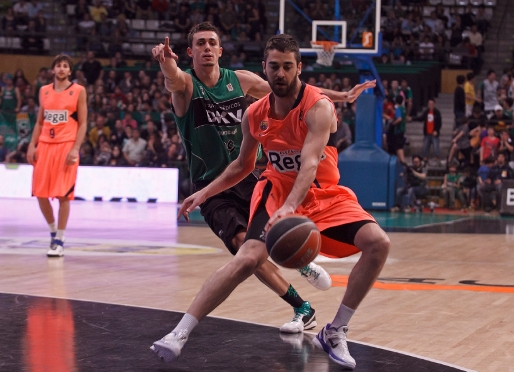 Badalona desperately needed a good start, and that was precisely what they didn’t get. They took three minutes to score, in which time Regal Barńa flew ahead thanks to twos from Perovic and Navarro and a three and a slam-dunk from Alan Anderson (0-9).

As the minutes ticked by, it became evident that there is a gulf in class between these two teams (4-14). Ricky was providing a stream of assists against his former club (first half evaluation of 8) and the Navarro-Anderson partnership (18 points in the first 10 minutes) made all the difference.

Only Will McDonald seemed to be causing problems for FCB’s sensational defence and thanks to the DKV centre’s efforts, his side was just seven down at the end of the first period, 16-23, when the gap could have been much wider. Sada then replaced Ricky, but the basketball was as smooth as ever, and although the shooting was less impressive (Navarro didn’t score in the 2nd period and Anderson only got two), the visitors were clearly on top.

Twelve up at the break 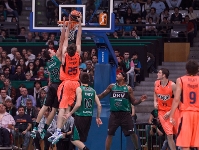 Boniface Ndong was amazing in attack and defence, and although there was a period when DKV looked like they might be biting back, the European champions then put their feet on the gas and flew into a 21-36 lead. Pepu Hernßndez was forced to call a desperate timeout.

A buzzer-beater from Perovic ended the half on 27-39, but after the break there was a sudden change in the state of affairs. A newly inspired DKV produced a 12-1 streak and although they never managed to get into the lead, what had looked like an easy win for Barńa was now anything but. Pascual was clearly desperate to get some kind of order back into his ailing team, but with the home fans now on full song and their heroes playing with all the intensity of a derby, rather than a foregone conclusion, we were now witnessing an absolute humdinger of an encounter.

Badalona got to within one (39-40), whereupon a Navarro 3-pointer established a bit more order among the FCB ranks. Some inspired basketball from the Blaugrana in the final moments of the period meant they were going into the fourth with a 5-point lead: 52-57. 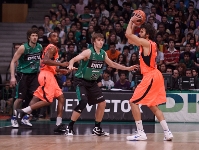 It was a nervy last ten minutes, with Badalona giving away far more possession than they would have liked, although Regal Barńa weren’t doing a whole lot better in that department. Both sides were making wrong decisions, and some of the play was frankly poor. But whenever the home side had the chance to equalise or go ahead, they failed in their attempt and finally it was a Navarro three that seemed to have decided the win (58-63). DKV’s last ditch efforts were in vain, and another Navarro score made certain that Barńa once again have the bragging rights in the local derby.