Regal Barēa have qualified for the Copa del Rey final in style, where they’ll be facing Real Madrid again. The Catalans brushed aside Caja Laboral (92-73), with Navarro topping the scoring with 26 points. 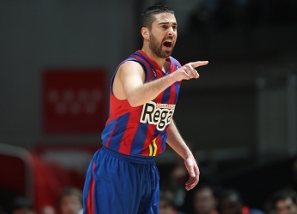 Place: Palacio de los Deportes de la Comunidad de Madrid.
One of the few trophies Juan Carlos Navarro is missing is the Copa del Rey MVP, but after today he’s well on the way to getting one. The guard was outstanding for Regal Barēa in their semi final, while Madrid defeated Power Electronics to set up a repeat of last year’s grand final.

Apart from Navarro, Perovic was also strong (11 points and 8 rebounds), while Alan Anderson (17 points) also made a massive contribution to the win over Caja Laboral, who managed to fight their way back into the game after being outplayed early on, but saw their hopes dwindle in the third period.

Barēa started much better than they did against Badalona. Anderson and Navarro had more space, the baskets flowed with ease and they soon had a six-point lead at 8-2, which caused Dusko Ivanovic to call a timeout.

This did have some effect, but not enough, and the Basques found themselves trailing 17-6 to an inspired FCB. Baskonia just couldn’t get their shots in while everything seemed to be going right for the Catalans.

The Barēa fans in the Palacio de Deportes were already singing, and raised their voices even more when Boni Ndong slam-dunked home a quality assist from Sada to make it +13 (21-8). A Pau Ribas three narrowed the gap just before the period ended at 21-11.

Caja Laboral then bounced straight back with a 0-7 streak, which called Navarro into action as he always does in times of need, and that was despite a Logan three throwing Baskonia right back into the fight (28-27). The Basques never quite managed to get into the lead, but things were still tight at the break 39-36. Navarro led the first half scoring with 15 points.

The same man added three more as soon as the second half was under way, and gradually they edged into a bigger and bigger lead. An Anderson three and an excellent Perovic really served to tip the balance Barcelona’s way.

Regal Barēa were the fresher team, and with the score at 62-49 with ten to go, the game was as good as decided. Xavi Pascual made sure the side didn’t relax too much by rotating his bench, Ricky also showed his class, while a 3+1 from Navarro sentenced the tie beyond Caja Laboral’s reach.

The fans started chanting “MVP” in honour of Navarro’s stunning display, and Regal Barēa were able to enjoy themselves for the closing minutes, all the time showing that they are much more than a one-man show, with a terrific team performance that left Caja Laboral exhausted by the end of it and sets up a terrific final against the ‘old enemy’.