Regal FC Barcelona coach, Xavi Pascual, signed a new contract with the club on Thursday that will keep him here until the end of the 2012/13 season. He signed the document in the club president’s office.

Pascual and Sandro Rosell were joined by the director in charge of the professional sports teams, Joan Bladé, and the technical secretary of Regal Barça, Joan Creus. The vice president for sport, Josep M. Bartomeu, was also there.

Pascual was named head coach on February 14, 2008 and has won a host of titles since then, including last season’s Euroleague success. 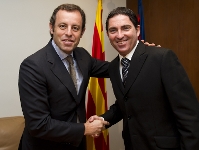