USAP are through to the semi finals of the Heineken Cup after a thrilling comeback to beat Toulon on a historic day for Catalan rugby. 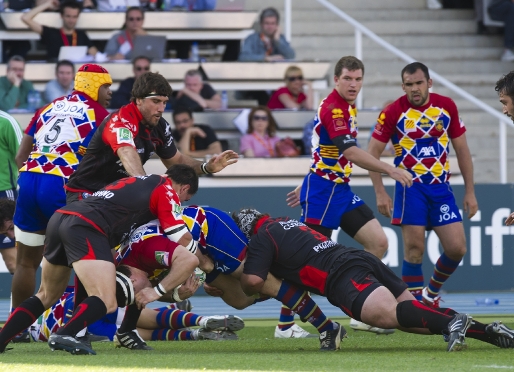 More info
Playing in front of a 55,000 Catalan flag waving crowd at the Olympic Stadium in Barcelona, in an unbeatable atmosphere, Perpignan looked nervy in the early stages and lost lock Vilaceca to the sin bin. It was Toulon who got the first points on the board, whilst the Catalans found it hard to break their opponents’ defence.

However, Perpignan kept in touch thanks to their kicker Jérome Porical, who converted his second penalty just to draw his team level at 6-6 despite losing Tchale-Watchou to another yellow card, but the first try of the game came just before the break for Toulon ’s George Smith and they went in 6-11 up after Johnny Wilkinson missed the conversion.

USAP came out the more focused for the second half though and after a penalty from Porical, Adrien Plante went over for his team’s first try of the game. The conversion put Perpignan ahead for the first time at 16-11, but soon after Van Niekerk went over for Toulon’s second try to draw the teams level again at 16-16, before Wilkinson’s conversion made it 16-18.

Perpignan fought back though, with two more penalties from Porical and a converted try from replacement Perry Freshwater to make it 29 – 18 and Toulon’s late third try was not enough to prevent the Catalans rounding off a great day to become the first team into the Heineken Cup semi finals, where they have played twice before, losing in 1998 and making the final in 2003, where they were beaten by Toulouse.