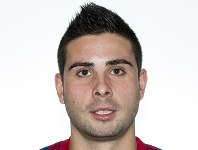 From very young, Marc Torra has had the potential to be a Barēa player. In 2010 this came true and he is the kind of person who is 100% appropriate for a club like this.

At the tender age of 25, Marc Torra is a natural scorer. He is not only lethal in the final metres, but can also win the ball, run and create his own chances. In recent years, he has been displaying such skills at Roncato Patķ Vic, but Barēa have had en eye on him for some time. In fact, Torra was on the club books when he played on loan at Lloret.

Torra is full of personality, and makes the most of his physique on court. He is the model roller hockey player and can adapt to all situations. Tordera is also a seasoned free hit and penalty taker.

Marc Torra helped Vic to its greatest ever successes in recent years, playing under Ferran Pujalte, who knows the player well.

Marc Torra first donned the skates at Tordera, the town where he was born on September 15, 1984. At the age of 15, Torra was already in the CP Tordera first team, and stayed there until 2002. He then moved to Lloret, which is where the Barēa scouts first spotted the youngster’s potential.

FC Barcelona stayed in direct contact with Torra and Lloret, where he stayed on a loan basis before switching to Vic in the 2006/07 season, where he was a key player.

In recent seasons he has developed into one of the most dangerous forwards in the country. In the 2009/10 season he scored 37 goals, the sixth highest tally in the championship.

Marc Torra was designated MVP of the Copa del Rey in 2010.