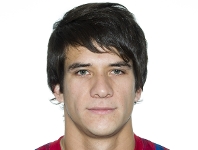 One of the best players in the world has joined Barcelona. Pablo Álvarez has joined Barça Sorli Discau as an important reinforcement.

Still just 24 (he turns 25 on September 30), Pablo Álvarez has decided to move on in his career. The Argentinian striker has signed for Barça Sorli Discau for four seasons.

PROFILE
An explosive player who moves well on and off the ball, Pablito Álvarez will cover for the loss of Carlos López. Both are similar players and both are left-handed.

Barça has been chasing Pablo Álvarez for some time, and the negotiations have finally paid off as the player gains maturity and looks to improve further.

He started playing the game as a child in San Juan (Argentina), a city that produces great roller hockey players. At Club Olimpia “we won all the consecutive league championships”, he remembers.

In 2008 he was snapped up by HC Liceo, and in Galicia won the CERS Cup (2009/10). He was top scorer in the league that season with 43, and also won last season’s Champions League, in which he was named Player of the Tournament.

In the OK Liga, he was named MVP of all-star day.

With Argentina, Pablo Álvarez will appear at this October’s World Cup in San Juan, after also playing at the World Cup in 2005 (San José-California) and finishing second, and in Montreux (Switzerland) in 2007, finishing third, and, 2009 in Vigo where they lost the final against Spain.