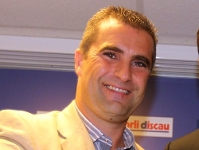 Gaby Cairo had a wonderful career both at club and international level. The Argentinian joined FC Barcelona at his peak and helped create the strongest side the club has ever known.

He has never forgotten the club that brought him so much joy, which, along with his national team, has always had a place in his heart. Gaby Cairo has signed a contract to manage the team for the next seasons.

It was in 2003/04 that Cairo decided to retire as a player. He gave the matter much thought, after winning the Final Four in Viareggio and the OK Liga in a perfect play-off against Tenerife, Liceo and Igualada.

After an emotional farewell, the university graduate ‘moved upstairs’, taking control of the amateur sports teams at the club, a job he has been doing ever since.

Everything as a player

Although this is Cairo’s first professional coaching position, he is qualified for the job and has experience of coaching youth teams. As a player, he won eight OK Ligas, five European Cups, four European Supercups, three Iberian Cups, four Copas del Rey, one Intercontinental Cup, one Nations Cup (1995), four Catalan leagues and four Vigo International Trophies, as well as others won while he was in Italy and at Igualada and Reus, taking his total up to 34.

At international level, we could call him the Maradona of roller hockey. He won gold at the Barcelona Olympics, and also appeared at World Cups and Panamerican Games for arguably the strongest Argentina team ever.