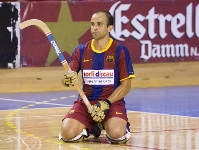 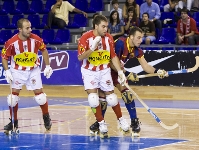 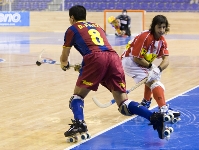 The first title of the year, the Spanish Supercup, was lost at the very Palau Blaugrana. After a stunning 4-0 win in Vic, Quim López’s side produced an even more amazing comeback to retain the title.

For the second year running, Barça Sorli Discau and Roncato Patí Vic met in the Supercup, the former as OK Liga champions and the latter as winners of the Coap del Rey.

Ferran Pujalte didn’t want any repeat of the 2009/10 edition, where Vic got off to a fine lead in their home match. And he got his wish, despite the international players only having been back for a week, with a crushing 4-0 victory.

The return leg at the Palau seemed nothing more than a formality, but Vic managed to produce the same 4-0 win Barça had managed on their own court and then with an extra time golden goal from Titi Roca, Roncato Patí Vic celebrated the title in the Palau under the Barcelona fans’ own noses for the second year running.