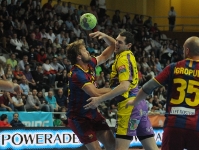 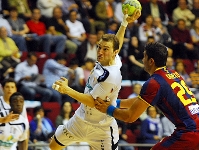 Barça Borges did not manage to retain any of the titles it won in the 2009/10 season. The Supercup, Asobal Cup and Copa del Rey all landed elsewhere in 2010/11.

Two of the three titles were lost to Ciudad Real, who won the Supercup at the start of the season (28-29) with that famous goal from Isaías Guardiola with just ten seconds to go. The final was played in Cordoba, and Barça Borges had actually been winning b y three at half time.

The Asobal Cup was a similar tale, played in Vigo in late December. Ciudad Real once again came from behind to clinch the trophy(31-34). FCB had beaten Ademar Leon (26-29) in the semi finals.

The third disappointment of the campaign came in the Copa del Rey, where a last goal from Bilbija of Cuatro Rayas Valladolid ended the Barça Borges dream in Vigo (25-26). In the semi finals, Xavi Pascual’s side had defeated Ademar Leon (30-28) with eleven goals from Juanín. The Copa del Rey trophy ended up going to Ciudad Real, who proved far too good for Valladolid.