The first trophy of the season, the Pyrenees League 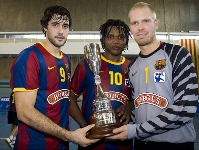 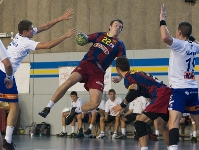 The first trophy of the season, the Pyrenees League

The Pyrenees league was the first title of the 2010/11 season for Barēa Borges. No no French clubs involved, they won the only game, against Granollers, to lift the trophy for the eleventh time.

Barēa Borges 2010/11, with some new faces, started the season with victory in the 15th Pyrenees League. Laszlo Nagy made his debut as captain after taking over from David Barrufet. In an all-Catalan affair with no French participants, Barēa beat Granollers 38-31.

Barēa Borges dominated with new stopper Sjöstrand amazing in goal (seven saves at half time, 15 in total). But Manolo Cadenas’ side still managed to lead at the break, 18-17. Barēa bounced back after the restart, with seven goals from Rutenka (amb set) as Barēa Borges moved further ahead of Granollers and eventually took the title without too many worries.