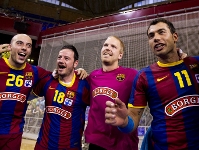 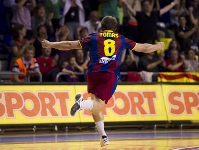 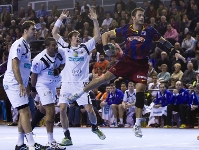 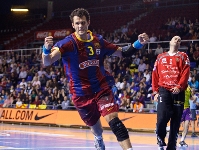 With the win in Logro˝o against Naturhouse la Rioja (25-30) in the penultimate game of the season, Barša Borges were officially claimed Lliga Asobal champions, after virtually ensuring the title the previous week with a win over Ademar at the Palau. With 29 wins in 30 games, Xavi Pascual’s team put in an excellent campaign, which included a run of 26 games without defeat.

Key wins in Zaragoza and Pamplona

The first half of the season involved some tricky visits, with two narrow, but key wins at CAI Aragˇ (30-32) in week 4 and against San Antonio (25-26) in week 6 –four points that in contrast Ciudad Real were to drop on their visits to Zaragoza and Pamplona.

There then followed three tough and decisive games for the team –against Valladolid (22-26), Ciudad Real (27-24) and Ademar (24-30) and they came out top in all three to finish the first half of the season alone at the top of the league and firmly established as favourites.

The Palau makes the difference

That meant the Palau was to become the site of the second half of the season’s big games and the team whacked both San Antonio and Valladolid by big scores - (35-25) and (36-23) to win by more than 10 goal margins.

Champions with a week to go

Week 27 saw the team visit the Quijote Arena, knowing that a win would give them the title, but Ciudad Real put off what was looking like the inevitable championship celebrations with a 30-27 victory. The 28-27 victory the following week against Ademar at the Palau with a fantastic shot from VÝctor TomÓs and a great last minute stop from Saric was enough to virtually ensure the title which was mathematically confirmed the next week in Logro˝o.