On April 25, 2010, after a great European match between Barça and Veszprém, Xavi O’Callaghan received a testimonial in honour of his many years at the club. His number 4 shirt is now on the Palau ceiling following a simple but emotional ceremony.

None of the fans that watched Barça Borges beat Veszprém ( 33-27 ) left once the game was over, for there was an emotional epilogue to come. One of the stars of the Dream Team, the silent hero, the kind of many any coach would want in his team and a man who gave his heart to this club, Xavi O’Callaghan, was recognised for all he did for Barça’s handball team.

Celtic band Di Alan and the dance troupe BCN Celtic Caos, in honour of his Irish roots, performed as O’Callaghan walked in composed fashion onto the court.

After a video of different moments of his career, O’Callaghan was joined by the current Barça Borges team and many stars from previous era, including Grau, Masip, Guijosa, Ortega, Svensson, Solberg, Barbeito, Xepkin, Serrano and many others.

Journalist Ricard Torquemada was master of ceremonies, and he welcome Oca’s oldest son into the arena, and when he said “I love you daddy” there were lumps in every throat. He was then presented with a ball signed by all the members of the Dream Team. Xavi O’Callaghan’s wife, Laia, holding Noa in her arms, their two-month old daughter, then joined the former player along with his brother David, who has the honour of unveiling his number 4 shirt, which now hangs alongside such greats as those of Grau, Masip, Urdangarín and Sagalés.

A visibly moved O’Callaghan then had his chance to speak. "You can’t imagine how proud I feel", he said, and then had some words to say to Xesco Espar, who "believed in me long before I did myself and I’ll never forget that”- and Valero Rivera, the other coach who has had such an influence on his career, and also president Joan Laporta. He also thanked all of his colleagues and, of course, the Palau supporters, who responded with a standing ovation. Xavi O’Callaghan then went on a lap of honour, having been consecrated as one of the great Barcelona handball legends. 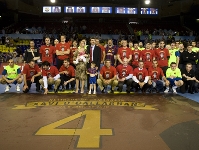