Barca Borges won the Asobal Cup in an exciting final against Ciudad Real. Pascual’s team needed extra time and a fantastic save by David Barrufet to lift the trophy for the sixth time in the Club’s history.

The Asobal Cup, which brought together the four best teams to fight for the last title of the 2009 campaign, was Barca’s third title of the season. Barca beat Reyno de Navarra San Antonio (28-32) in the semi-finals. The Navarrans put up a good fight throughout the 60 minutes and at halftime Barca held a narrow 15-16 lead. In the second half some splendid defensive work together with a lethal counterattack swung the game in Barca’s favour.

In the final Barca Borges came up against Ciudad Real for the third time in the season. At the break Barca Borges led a nail-biting affair 14-13. The second half was equally hard-fought and a Victor Tomas goal 21 seconds from time took the game to extra time. Neither side could pull ahead and with the scoreboard showing 34-33, Ciudad Real took the last throw of the game through Luc Abalo. David Barrufet made a wonderful save to bring the Cup back to Barcelona. 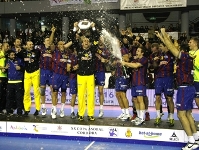