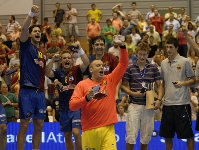 The Asobal Super Cup was FC Barcelona Borges first title of the 2008/09 season. Barca beat Ciudad Real by a single goal (26-25) in a thrilling game in which they showed themselves a remodeled and much stronger team than the previous year.

BarÓa Borges made a great start to the season beating Ciudad Real in the first game of the new campaign between the two big rivals ( 26-25 ). It was equally close as the last time the two met when Ciudad Real won by a two goal margin, but this time Barca played a very solid game and gave their opponents no chance as they chalked up their 13th Super Cup. 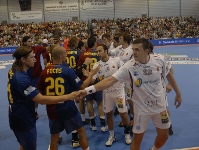 BarÓa Borges came out strong defensively with Boldsen and Jernemyr directing the 6-0 defence and Ciudad Real found it hard to get a shot in and when they did, Kasper Hvidt was on top form.

Only Viren Morros was causing any problems and he and Luc Abalo combined to cut Barca’s lead from 6-9 to just a single goal on 19 minutes. Barca’s nerves began to show, but they held on to go into the break 11-14 up. 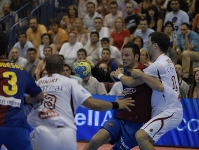 Ciudad Real came out fighting in the second half and goals from Morros and Kallman again put them within a single goal(13-14), but Victor Tomas showed began winning balls in defence and Barca chalked up a four goal flurry that virtually sentenced the game with 10 minutes left to play at 19-24. JuanÚn extended the lead to five goals and Barac were able to withstand Ciudad Real’s late charge.