Barēa Borges added the Kings Cup and the Super Cup to their collection of silverware after a barren season. Cadenas handed on the coach’s role to his number two Xavi Pascual in a season when FCB challenged Ciudad Real for the league title to the end.

Barēa Borges started the season well with the Super Cup, beating Ciudad Real 26-25 and achieving Manolo Cadenas’s first title as coach. Despite the efforts of the Olympic games, which left the team without the usual preseason preparations, the results were positive. The win against Valladolid ( 30-25 ) in the opening game was a good example. 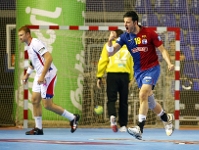 However, the Olympic Games did have one negative effect - Iker Romero’s right elbow injury which required surgery and a 6-week absence from the team. The Club subsequently brought in the Tunisian star Oualid Ben Amor for the rest of the first half of the season.

In the Champions League, Barēa Borges easily dismissed Metalurg Skopje but then came up against much tougher opposition in Kiel, who won in the Palau ( 27-31 ) and in Germany ( 33-26 ). This meant that Barēa went through to the second round without points.

Sweet and sour in December 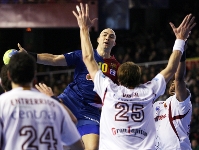 December proved to be a difficult and decisive month with two wins in the league – away to Granollers ( 26-32 ) and at home against Ademar ( 24-28 ). This left Barēa Borges at the top of the table despite having slipped up away to Portland ( 29-28 ). However, the defeat in the Palau against Ciudad Real ( 28-31 ) did the real damage and allowed Ciudad Real to take over at the top.

Twenty days later, Ciudad Real returned to the Palau for the Asobal Cup. Barēa Borges beat them in the semi-final ( 26-23 ) but an on-form Ademar swept to victory in the final ( 25-31 ).

A change of coach 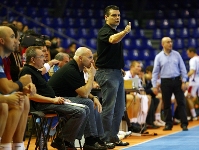 After the Croatia World Championships, Barēa Borges made a bad start to the second half of the season, losing 30-27 away to Valladolid and Manolo Cadenas was replaced as coach by his number 2 Xavi Pascual. The new coach faced a tough challenge in the second round of the Champions League and the team was unable to overcome Ciudad Real in the two games and were eliminated.

Despite this disappointment, the team recovered and put together a great run of victories. Xavi Pascual gave the players back their confidence and produced an impeccable set of performances to win the kings Cup , beating hosts Granollers, Portland and, once again, Ciudad Real in the final to lift their second trophy of the season. 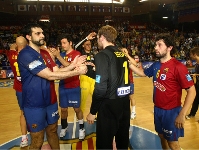 The team were now able to concentrate on the Asobal league, where they needed to pull back Ciudad Real’s two-point advantage or, at least, not slip back any further before their visit to the Quijote Arena in the last game but one of the season. Xavi Pascual’s men produced some spirited displays leading up to this vital game with victories that exceeded differences of ten goals.

Finally, they needed to win by four goals against Talant Dujshebaev’s Ciudad Real but the home side proved intractable and took the game and the league title , leaving Barēa Borges as runners up in the league.