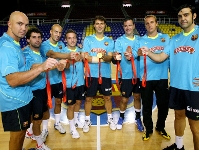 Apart from the games, the entire experience of travelling to Beijing was one the players will remember forever. They are used to World and European Championships, where they only compete alongside fellow handball players, so it was a valuable experience to share time and space with other sportspeople. Among the Spaniards, a particularly special link was forged between the handball players and the cyclists. The chance to see the likes of Kobe Bryant, Michael Phelps and Rafa Nadal in flesh were also memories to be treasured.

Seven BarÓa Borges players came back from the Olympic Games in Beijing with bronze medals around their necks. The Spanish internationals enjoyed an unforgettable experience in China.

The BarÓa Borges players that travelled to Beijing had high hopes of winning medals. Twelve players on three teams had real chances of winning (Croatia, Spain and Denmark) in the Chinese showdown. 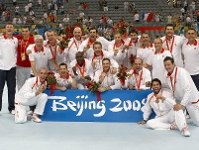 The Spain team coached by Juan Carlos Pastor, and with no fewer than seven FC Barcelona players in David Barrufet, RubÕn Garabaya, JuanÚn GarcÚa, Demetrio Lozano, Albert Rocas, Iker Romero and VÚctor TomÃs got off to an irregular start in the group stages, but made it into the knockout round. In the semi finals, they went out to the surprise package of the tournament, Iceland (36-30). But there was still the fight for the bronze to come, in which Spain beat Croatia in an epic match (29-35). 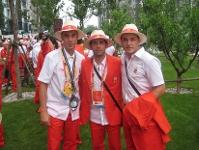 Two BarÓa players were particularly outstanding. David Barrufet, the BarÓa and Spain captain, was standing down after four Olympic appearances. JuanÚn GarcÚa ended up as the competition’s top scorer on 49 goals.

Barrufet and company came back with bronze, but the other representatives returned empty handed. Venio Losert of Croatia lost out to Spain in the bronze medal match. Denmark and Kasper Hvidt, Mikel Hansen, Jesper Noddesbo and Joachim Boldsen did well, finishing in seventh place.