A rocky path in Europe 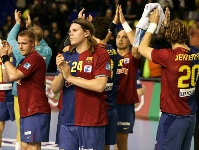 A rocky path in Europe

BarÓa Borges fought to the very end in the Champions league before being overcome by two insurmountable obstacles - Kiel and Ciudad Real.

With one round still to go in the second phase of the handball Champions League, FC Barcelona ran out of possibilities for qualifying for the quarterfinals. The defeat against Ciudad Real in the Quijote Arena ( 32-29 ) meant that BarÓa could not go through to the next round.

The new competition format and the draw for the two phases both counted against BarÓa Borges, who were unlucky to face extremely tough opposition in each phase. 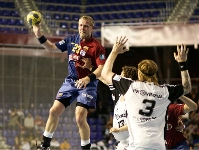 In the first phase, BarÓa was drawn against Kiel, Drammen and Metalurg Skopje. BarÓa had no problems with the latter two teams, either home or away. But Kiel, with one of the strongest squads in Europe, and featuring players such as goalkeeper Omeyer, proved to be an insurmountable obstacle. The Germans won the game in the Palau ( 27-31 ) and did the same in Germany ( 33-26 ).

And then Ciudad Real 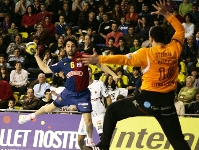 BarÓa qualified for the next phase without points whereas Kiel had four. The draw for the second phase matched the two teams with the other big gun of European handball Ciudad Real, reigning European champions, plus Gudme. Ciudad Real had also qualified with four points which meant that BarÓa had to beat Dujshebaev’s men head on.

The situation became even more difficult when BarÓa lost in the Palau ( 28-31 ). In spite of this setback, BarÓa fought hard to make a comeback in the Quijote Arena and, despite a good performance, was unable to cancel out the three-goal lead.