A league of two halves 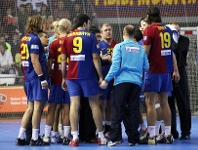 A league of two halves

There was a change of coach midway through the season and it was very much an Asobal league of two halves for FC Barcelona Borges.

Barça Borges finished off the Asobal League with a home win but there the really decisive moments came earlier on in the season. Barça accumulated just four defeats over the season, two of them against the champions Ciudad Real, but were held to second place.

Barça had a tough start to the campaign against Valladolid, a direct rival for the title. Although they had little time to prepare the game given that the majority of the players came directly from the Beijing Olympic Games, Manolo Cadenas’s team powered their way to a comfortable victory.

Barça Borges kept up this winning form and took the lead in the league thanks also to some unexpected setbacks for Ciudad Real against Arrate and Algeciras. However, the narrowest of defeats in the eighth round away to Portland ( 29-28 ) allowed Ademar to seize top spot. Two games later Barça were back in first place and preparing themselves for a difficult month of December with visits to Granollers and Ademar, and the home clash against Ciudad Real.

Defeat in the Palau against Ciudad Real 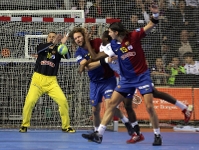 Barça came out victorious from the first two challenges but Ciudad Real proved to be a tougher nut to crack. The defeat in the Palau ( 26-29 ) was a real setback for Barça Borges, who then had to face the second half of the season with the goal average against them ahead of the visit to the Quijote Arena. Despite the slip-ups, both clubs finished the first half of the season tied at the top of the league.

A change of coach 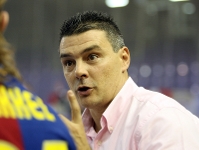 The second half of the season started badly for Barça with a defeat away to Valladolid ( 30-27 ), allowing Ciudad Real to open a lead at the top. Manolo Cadenas was replaced as head coach by his number 2 Xavi Pascual, who got off to a winning start against Almería in the Palau ( 30-26 ).

Xavi Pascual gave the players back their confidence and the team began an unstoppable run of victories, some of them requiring tremendous spirit such as home game against CAI ( 34-32 ). That showed that the team had not given up the league for lost and the aim was to maintain a 100% record before the trip to the Quijote Arena – and that’s just what they did. Nor Granollers, nor Portland, nor Ademar could stop Pascual’s team. 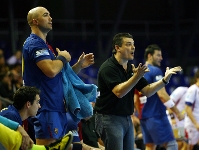 The league title was decided in the penultimate round in the Quijote Arena. Barça Borges had to win by four goals to take the league leadership. It was too much to ask and Ciudad Real were never in any serious trouble ( 37-26 ) and were crowned Asobal league champions with one game still left to play.