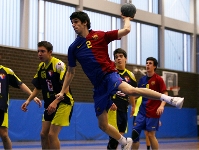 The handball section decided to reform its infantil team after several years with no teams in this age group. Under the guidance of Jordi Giralt the fledgling team managed to perform outstandingly. The younger players in the section were a class above the rest in the Catalan League. In fact they only lost two games all season, both against Ademar Leon. That side, with home advantage, prevented Barça from winning the Spanish Championship. This promising generation of young handball players was, however, able to celebrate wins in both the Catalan Championship and Cup.

The future at the club looks secure judging by the youth teams’ performances. All of the sides have pushed for titles and left a great image. The B team winning promotion and the Juvenil team winning the Spanish Championship were the highlights.

The 2009/2010 handball season ended positively. The different youth teams did well in their respective competitions. The First National Division side has moved up a category to the Division of Honour B, the side using members of the Juvenil team, which won the Spanish championship. The Cadet A team lived up to expectations and retained the Minicopa, while the younger Cadet B did well against players that were often a year older than them. The Infantil team returned, and had a wonderful season too. 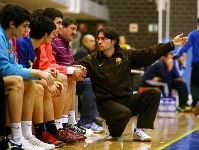 With a new and rejuvenated roster, the second team completed a brilliant season by gaining promotion to the Division of Honour B. The Barça Borges reserves were easy winners of First national Division Group C. They were clearly superior under the expert management of Andrei Xepkin who took over from Oliver Roy midway through the season, the latter having left to work as assistant coach to first team manager Xavi Pascual. 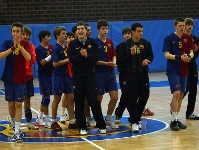 The juvenil team had a successful season, winning the state championship, the final being in Mataró against Granollers. The fellow Catalan outfit was Barça’s main rival all year in the category, winning the Catalan Championship. The sides also met in the final of the Copa Catalunya, which was won by Barça. Such success is even more remarkable given that the team was continuously forced to operate without several key players, who were frequently required to play for the Senior B team instead. Juvenil players Álvaro Ruiz and Gonzalo Pérez de Vargas even got call ups to play for the first team.

The side coached by Antoni Juanpera ended the season by meeting the targets set for them at the outset. The side coached by Xuxum retained the Minicopa, the equivalent to the Copa del Rey for older teams. The second year cadets came up against a very strong rival in La Roca, who won both the Catalonian and Spanish championship titles.

Ŕlex Barbeito’s side had a fine season, finishing fifth in Catalonia. This was some performance considering that the first year team was up against sides that were mainly one year older than them, yet they won several matches against more experienced teams, and even managed to finish higher up in the table than the likes of Sant Martí and Granollers B.