The Kings Cup goes to the strongest 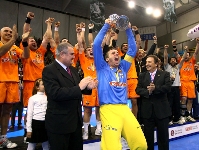 The Kings Cup goes to the strongest

FC Barcelona Borges travelled to the Palau Olímpic in Granollers determined to lift their 16th Kings Cup. Along the way they defeated the host side, Portland San Antonio and Ciudad Real to run out deserved winners.

It wasn’t an easy competition for Barça Borges, but coach Xavi Pascual’s men gave a great display of effort and dedication to win the trophy . It was especially significant for Pascual as it was his first trophy as team coach whereas for team captain David Barrufet it was his ninth Cup.

Debut against the hosts 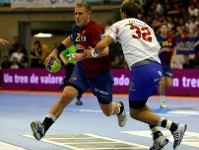 The first test was against the host club Fraikin Granollers ( 25-30 ). A highly motivated Granollers made life difficult for Barça and at the break the scoreboard reflected a close game (12-13). Granollers started the second half strongly and managed to take the lead but a defensive change to 5-1, with Ugalde up front, took Lorenzo Rueda’s Granollers team by surprise and the locals gradually lost their grip on the game. 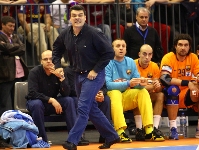 The semi-final against Portland San Antonio and Barça Borges took a heavy toll on both teams but it was Barça who withstood the pressure best to power their way into the final ( 35-26 ). Luck didn’t go Barça’s way in the opening minutes and a combination of some tough defending and an impeccable performance from goalkeeper Tomas Svensson frustrated their attempts to score.

However, Barça retaliated with their most effective assets: goalkeeper Barrufet, the counterattack and an unbreakable wall at the six metre line. Portland threw everything they had into the game but gradually weakened just as Barça went from strength to strength. 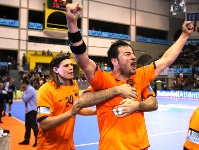 A final between Barça and Ciudad Real was what the fans, and both teams, had been looking forward to. A highly attractive pairing that finished in Barça’s favour ( 29-26 ). The first half reflected the fine balance between the two sides and the level of respect both sets of players had for each other (14-14). Little changed after the break but a partial score of 5 -2 in the 20th minute turned the game definitely in Barça’s favour.

With the scoreboard at 24-21, FC Barcelona Borges grew in confidence and with Iker Romero (ten goals) directing play, they took control of the game. Barça thus won their second trophy of the season after the Spanish Super Cup and against the same rival, Ciudad Real.