Asobal Cup slips away in the Palau 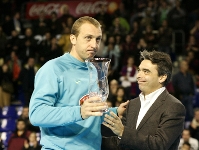 Asobal Cup slips away in the Palau

The Asobal Cup was held at home in the Palau this year but that wasnt enough to overcome Ademar in the final. The team coached by Manolo Cadenas achieved a convincing win over Ciudad Real in the semi-final but couldnt complete the job in the final.

The Palau Blaugrana hosted the Asobal Cup on 27th and 28th December 2008. FC Barcelona came close to winning the competition at home but in the end it just wasn’t to be. The final was the same as ten years ago and coincidentally ended with the same score line - Ademar Leµn 31 BarÓa Borges 25. 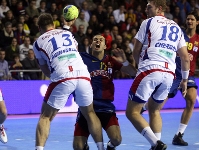 Ademar Leµn went for victory right from the start and soon took control of the game. BarÓa were pushed onto the back foot and found it impossible to stop the players coached by Ribera. Goalkeeper Alilovic was a real nightmare for the BarÓa players together with Sarmiento and Stranovsky, who scored eight goals apiece.

Ciudad Real defeated in the semis 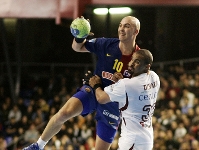 In the semi-final, BarÓa Borges were up against their old rivals Ciudad Real, a real duel of titans in which BarÓa ran out convincing winners 26-23 . After some minutes of indecisive play, Cristian Ugalde took the game by the scruff of the neck and overwhelmed Talant Dujshebaev’s men. Ciudad Real never gave up but BarÓa held firm to book their place in the final.