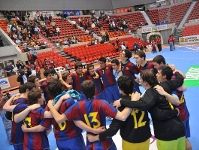 BarÓas youth handball teams had a fine season, especially Cadet A. The young handball stars did well on all fronts.

The second team went though a transitional season, the intention being to develop a younger team of players aged no more than 20 years. The season got off to a tough start, with injuries and difficulties getting results. Between Christmas and Easter they moved up to fourth in First National, but with no hope of making the top positions, and the level dropped, and they finished eighth. The side coached by Oliver Roy will only be keeping six of last season’s players, and is planning to promote several youth players. 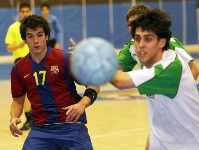 Catalan Champions and of the Federation Cup, the juvenil team failed to top a great season with the Spanish title, finishing third in the final stages. Manager Pau Campos took charge of the side midway through the season as a replacement for Toni Garcia, and had a very young side in his charge, 10 of the 17 players were first year, but they only lost two games all season.

The team coached by âlex Barbeito is undoubtedly the most in form of all the youth handball teams, They won the lot, the Minicopa del Rey, the Catalan Championship and the Spanish Championship. Three titles for a team that simply had no opponent in the same class this season. The BarÓa cadets won the best team awards in every competition they played in, and everything suggests a very bright future indeed for this generation of players.

The youngest handball team had a difficult, tough season, as they were first year players playing against teams made up of second years, who were simply bigger and more tactically aware. However, Antoni Juanpera’s side ended the season well and won the Catalan Cup, beating teams like La Roca and Granollers.