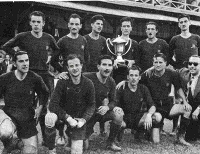 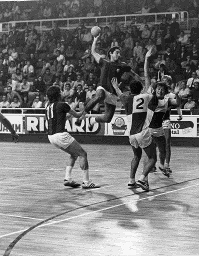 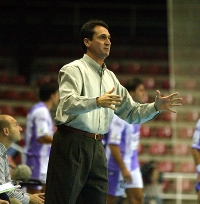 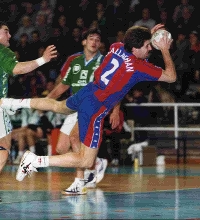 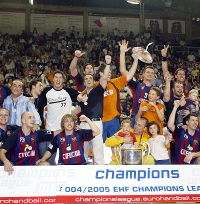 HISTORY OF THE HANDBALL SECTION

The handball section was officially founded on November 29, 1942, although there are references to friendly matches played by Barça in the thirties.

This sport was originally played by eleven players on full-size football pitches, and it was not until the fifties that the game was played as it is today, by teams of seven players in indoor courts.

The handball team soon found success. They won the double of the Catalan and Spanish Championships for three seasons in a row in the mid forties. And two further doubles were won in 1949 and 1951. In the 1950s, Barça’s handball team would win one more Spanish and four more Catalan Championships

Consolidation of the modern game

Barça went with fashion and switched to the indoor seven-a-side variant, but found no major success until the late sixties and a league and cup double in 1969. The Palau Blaugrana was constructed shortly after, and provided the perfect home for Barça’s indoor sports teams, and also the consolidation that handball needed at the club. And although the seventies was a decade dominated by Granollers, Calpisa and Atlético Madrid, and Barça only managed two cups and a league, the section was growing, and was on the verge of its most successful period ever.

The eighties began with two League titles and one Copa del Rey, which coincided with the arrival of Valero Rivera as head coach in 1984. Rivera would lead the team to more titles than ever before, as Barça collected silverware not just in Spain, but in Europe too for two amazing decades. FC Barcelona came to dominate Spanish handball, winning five consecutive league titles from 1987 to 1992 and another five from 1995 to 2000, as well as collecting nine Cup titles up to the year 2000.

All conquering in Europe

Barça ruled supreme in Spain, and that dominance was spread into European competitions too. Led by Serrano and Sagalés, three consecutive Cup Winners Cups were won in the mid eighties. Then, Barça won its first European Cup in 1991, followed by two consecutive Cup Winners Cups in the mid-nineties. But this was just the start of it. From 1996 to 2000, Valero Rivera’s team set an amazing record by winning no fewer than five European Cups in a row, something no team had ever done before, and no team is ever likely to do again. To top it all off, Barça also won four consecutive European Super Cups.

Goodbye to the 'Dream team' and a new model

In the 2003-2004 season, Valero Rivera stepped down as manager, along with one of the greatest handball players of all time, Enric Masip. When Urdangarín, Guijosa, Ortega, Xepkin and O'Callaghan, among others, moved on too, the unrepeatable days of the Dream Team drew to a close. The vacancy left by Rivera was filled Xesco Espar, while Masip and O'Callaghan stayed at the club in administrative roles. But despite the major changes, the success continued. Led by captain David Barrufet, a survivor of the Dream Team, and with new players of such class as Nagy, Skrbic and Iker Romero, the team has held its place among the elite of the sport, as shown by a seventh Champions League and the Asobal League title in 2006.