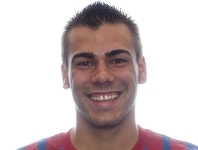 Sergio Lozano joined FC Barcelona in the summer of 2010 from Reale Cartagena, on a four year deal. In his first season, he was loaned out to Caja Segovia, before coming back to the Palau.

Born in Alcalį de Henares on 9 November 1988, he began his career at ERS Arganda and he has always been on the radar of the big teams, beginning to make a name at Las Rozas Boadilla, where he played for four years and won the Spanish Championship in the 2007/08 season.

His good performances won him international honours and he won the under21 European Championships to add to his two European Youth Championship titles(05/06 and 06/07).

He joined the top flight in the summer of 2008 when Reale Cartegena signed him. There he became the leader of the team and a firm favourite with the fans. He scored 15 goals in 24 goals in his first season and improved the following year to score 26 in 29 games -23 of which he started. Last season he scored 28 goals.

The arrival of the Lozano will widen the tactical options available to Barēa Alusport. He is a strong and versatile sweeper, defensive and pacey with a great goal scoring ability whose youth promises plenty of potential.