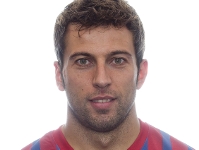 Jordi Torras Badosa is back at the club where it all started, Barša, after enjoying success with one of the Divisiˇn de Honorĺs biggest teams. He is a defensive winger with the ability to score goals.

Jordi Torras started playing futsal at Palma de Cervellˇ, but spent most of his youth years at FC Barcelona, and made his first team debut at the age of 16. Hr remained from 1996 to 2003, before joining another Catalan club Mirˇ Martorell. At the time, Barša’s futsal team was still only semi professional and Torras was aiming for bigger things, playing for a club that alternated between the top flight and second tier of the Spanish game.

In a year at Martorell he wan the Copa Catalunya (which he had already won in 2000 with FCB), and was then signed by Polaris World Cartagena, one of the top teams in the Divisiˇn de Honor, and where he gained experience before changing again, this time to Inter Movistar. That was when the biggest titles started coming his way. In Madrid, Torras won everything, a Liga title, the Spanish Cup, the Super Cup and the UEFA Futsal Cup. With such success also came a regular place in the Spanish national squad.

After seven seasons at the highest level, he is returning to FC Barcelona where the section is now fully professional and aiming for the very top. “Coming back to Barša is a homecoming. I am coming to a club with a great project and whose ultimate aim is to win titles”, he said on signing for his new club.

Jordi Torras is a defensive minded player although in his early days at Barša he was used in attack. He moves down the left wing, and often breaks through on goal. Over the years, he has become more and more defensive, and provides stability at the back, although it is still not unknown for him to launch a run through into attack. In deed, last season he scored 15 goals in the regular season for Inter.