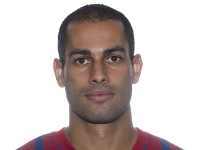 Fernandao signed for Barça Senseit at the start of the 2007-08 campaign. The Brazilian pivot is a guaranteed source of goals as he has proved to be lethal in and around the box and in one-on-one situations.

Fernandao was born in Sao Paulo, Brazil on August 16, 1980. The pivot has spent almost his career in his homeland after joining GM Sao Paulo aged 21. That was not his first club, however, as he has also played previously for Ulbra, Malwee and Vasco Rio. The following year he moved on again to sign for Banespa and then Toledo. Fernandao then played for Sao Migual and Joinville before finally making the decision to move to the Spanish league.

His first club in Spain was Martorell, who now in the Primera Nacional, who he signed for at the beginning of the 2004-05 season. In his two years with the Catalan outfit he won to Catalunya Cups and was top goalscorer in the 2005-06 campaign with 51 goals. The following year he joined Playas de Castellón, where he has plauyed until joing Barça Senseit. "It is a dream for any player to join Barça," he said. "Just the name of the club means everything. I had no doubts about coming here and neither did my family."

Fernandao has proven to be one of th most effective pivots in the league. He is very sharp in front of goal and also can play out wide when required to. His mobility and physical strength are key features of his game and, as well as scoring, he enjoys creating chances for his team-mates.