The League, the Spanish Cup, the Copa del Rey and the Copa Catalunya. As good as it gets. Five seasons after starting out in the División d’Honor, Barça Alusport won everything possible in a season to remember.

Barça returned to the División d’Honor in the 2006-07 season with great expectations. The Club was determined to put the FC Barcelona name among the futsal elite. The section had turned professional a year earlier and after returning to the top flight, with that unforgettable promotion at Gáldar, the challenge was to keep reaching for the stars.

Five difficult years followed, with disappointments and defeats, but they got there in the end. Working hard and seriously, many players were left by the wayside, but they too played their part in this success. Five years after that promotion in the Canaries, the club is now among the best. The 2010-11 season is one that will always be remembered as the perfect season when every possible title was won.

One team, one goal 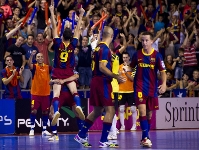 Javi Rodríguez should be thanked for his idea to make this team big. To see the best player in Spanish history lifting these trophies as Barça captain is an image that the supporters in the Palau will always remember. Beside him, an amazing team of people and some incredible talent on the court, and fans that were more and more enraptured by the cause, which made Barça Alusport the team of the year.

In August the pressure was the same as ever, with no major titles to the team’s name, but oozing with confidence. It started with a further victory in the Copa Catalunya, but the ambitions now ran further than that. The team had to make a grand final, and had to win it.

Segovia in February went down in Barça folklore. The first title was won at the Pedro Delgado, the Spanish Cup. "The first is always the hardest, the next will come of their own accord", said Javi Rodríguez. Chico and Marc Carmona, his fellow veterans, hugging him at the end of the game against El Pozo just showed how much work, effort and non-conformity had gone into doing this. We did it at last!

The captain’s prediction was right. Two months later came the Copa del Rey, another trophy FC Barcelona had never won, and they continued to rewrite the history books by winning the long-awaited League championship. The biggest title of all. The best end to a perfect season, and a reward for the most consistent team, with the best defence, the best attack, and the best all-round squad. Barça Alusport have won their ticket for Europe, where they have to keep growing. Who knows? Perhaps a new legend has been born.