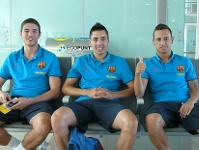 Barēa B Alusport’s first season in the Second Division can be considered more than notable. Santi Gea’s side finished ninth and were one of the best teams of the second half of the season.

After a slow start to the competition as Barēa B adapted to the new category, the Club’s youngsters had a spectacular second half of the season. In fact, they were the third best team following some great progress both tactically and physically, meaning the second team had no problem staying up.

Santi Gea, assistant coach to the first team last season, took over the side as a substitute for Albert Canillas, who was moved to the first team’s coaching staff. Gea’s experience and the players’ strong desire to impress meant they overcame early problems to adapt well to futsal at this higher level.

The team started with a convincing win over Extremadura Caceres at the Ciutat Esportiva Joan Gamper (4-0), but soon realised that the Second Division is a demanding, professional level. Three straight defeats in the last seconds of games generated doubts, but they raised their game and performed well against some great teams and never fell into the relegation zone. After the first half of the season, they had 22 points.

It was after the Christmas break that things took a turn for the better. Four draws in a row were just the start of it, as players like goalkeeper Julio, Jordi Campoy, Roger Serrano, Įlex Verdejo and Juanito started to settle, and took on new responsibilities when colleagues like goalkeeper Chema Mella, Sepe and Čric Martel were called up for duty in the first team to cover for injuries. Those experiences had a long-term benefit, and the reserve team won six of the last eight games, and easily avoided relegation.

More important than the results was the way the Barēa players improved as recognised by their coaches. The switch from amateur games in National A to matches against professional teams is a demanding one, but also meant they were better prepared for potential call-ups to the first team. Marc Carmona can relax. He has some great youth players coming through.