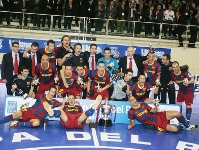 In the Spanish Cup final in Segovia, Barša beat El Pozo Murcia, and in Toledo they got the better of Inter, confirming that FC Barcelona is now up there with the two teams that have dominated Spanish futsal in recent years.

FC Barcelona will always be remembered as the first team to win the futsal Copa del Rey, a tournament that the RFEF and LNFS set up this season using the same format as the football competition.

Barša were impeccable in this competition. Marc Carmona’s side reached the grand final in Toledo after five wins in five game s, four away from the Palau. They started against Second Division BP Andorra, who they also met in the semi finals of the Copa Catalunya. Wilde (2), Lin, Igor and Carlos got the goals as Barša won 2-5.

Barša Alusport then had to win a tough derby away to Marfil, and won 0-2 in Santa Coloma with first half goals from Saad and Javi Rodriguez. The quarter finals brought another toughie for Barša Alusport, but they won 3-5 at the always difficult Benicarlˇ.

The semi finals were two-legged, but Barša Alusport were enjoying the best moment of the season and sentenced the tie in the first leg by winning 2-9 at the Municipal de Lugo and back at the Palau they extended that by winning 6-1.

Final against Inter... and bad luck 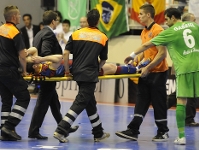 Barša Alusport were proclaimed champions by beating Inter Movistar in Toledo (4-3). They had to overcome a tough opponent and injury problems to win in the last moments of overtime. It was a true champion’s performance against all the odds, in which collective effort won through in the end.

The side from Madrid went ahead and this setback was followed by an injury to goalkeeper Cristian. Paco Sedano replaced him and made some decisive saves. Wilde equalised 40 seconds before the break, but the bad luck returned when FernandŃo scored an own goal and Chico and Wilde also retired injured.

Barša’s equaliser was a Schumacher own goal, to send things into overtime, where Inter went ahead again. When all seemed lost, Jordi Torras and Lin grabbed a goal each to clinch the game, the final and the title. Javi RodrÝguez lifted the third trophy of the season. Many more teams will win the Copa del Rey, but the first ever will always be in the FCB Museum trophy cabinet.