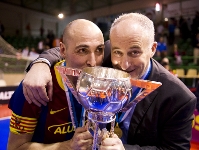 February 6, 2011 is now a historic date and the Municipal Pedro Delgado goes down in Barēa legend. Barēa Alusport won its first major trophy and a few days later, captain Javi Rodrķguez and coach Marc Carmona were in the FC Barcelona Museum to hand over the silverware in a simple, but emotional ceremony.

The Castilian city will always be associated to the history of the section. In Segovia, Barēa Alusport won the Spanish Cup, the first great title of the LNFS era.

Javi Rodrķguez and Pedro Delgado lifted the first national futsal trophy in Barēa history. It was hard-worked and thoroughly deserved, and on the way they beat Fisiomedia Manacor, host side Caja Segovia and defending champion, El Pozo.

Barēa Alusport started against the Balearic side, the surprise package of the regular season, who had just beaten Barēa in the league. The 6-0 result was somewhat flattering, but FCB were vastly superior and dealt better with the tension of the moment against a side making its debut in such a tournament.

Lin and Wilde, with two each, Saad and Igor scored the goals for Barēa, and then Caja Segovia beat Benicarló in overtime and to set up a great semi final. The whole city would be rooting for the home side to get into the final.

Superman Sedano is back 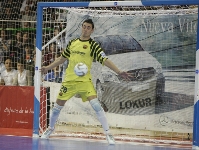 It was a tense, exciting game in which a goalless first half was followed by Barēa Alusport getting two goals (Lin and Fernandćo) that looked to have done the job. But Jesus Velasco’s side turned to individual talent and soon pulled level. Sergio Lozano, an FC Barcelona player on loan to Caja Segovia, made it 1-2 and Antońito then converted a Matķas assist to make it all square again.

In overtime, neither team broke the deadlock. It went to penalties and Caja Segovia had it all to lose after Jordi Torras missed. Cristian was replaced in goal and Paco Sedano, like last year against Lobelle, made two saves to ensure last-ditch qualification.

The reward for years of work

Against the champion of everything, El Pozo, nemesis of Barēa Alusport on so many occasions, Barēa took their chances when they counted to lead 3-2 at half time. Wilde scored two of the goals that hit the Murcians hard.

Chico, in the second half, looked to have settled things, but goals from Įlvaro and Dani Salgado kept the emotion alive. Chico then scored a buzzer-beater that sent the FCB players into raptures, and the stands as well, where numerous Barcelona supporters had gathered. Barēa Alusport had finally won a championship.