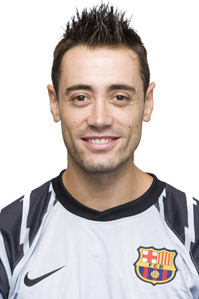 Goalkeeper Paco Sedano has spent the last seven seasons as one of Můstoles' key players as well as becoming a regular in the Spanish national team. At BarÁa he is confident that he will become a vital player for the team.

Paco Sedano was born in Madrid on December 2, 1979. After beginning his professional career with Autos GarcŪa-Coslada, the goalkeeper moved to PSG Můstoles at the start of the 1999-00 campaign and has remained there up until opting to leave and join BarÁa Senseit. He did taste much success in the major competitions with Můstoles, but has certainly made his name on the international stage have helped Spain win the World Championships and the European Cup. In 2004 he was voted as best player in the Community Cup in Madrid.

To leave Madrid and move to Barcelona was something that Sedano could not resist: "Coming to his club is a real step up in quality for my career," he said. "It is a test and a challenge. The short-term plan to make BarÁa one of the best clubs in the league was shown to me and it convinced me immediately to join."

He is a very strong goalkeeper and is impressive in one-on-one situations. Sedano also has great distribution of the ball and controls things in and around the area well. He has a great deal of experience at both club and international level and has psent many years playing in the Divisiůn de Honor, where he has always been a regular.